The following analysis of select counties of the Montana real estate market is provided by Windermere Real Estate Chief Economist Matthew Gardner. We hope that this information may assist you with making better-informed real estate decisions. For further information about the housing market in your area, please don’t hesitate to contact your Windermere Real Estate agent. At the end of the first quarter, 505,200 people were employed in the state, which is up 17,400 from a year ago and 16,100 more than the pre-pandemic peak. Regionally, job levels in Billings and Missoula were also above pre-COVID-19 rates. Great Falls is only 200 jobs shy of matching its February 2020 level. Given the solid pace of job growth in the state, it’s not surprising that the unemployment rate is at a very low 2.3%. This is the lowest rate Montana has seen since the Labor Department started keeping records in 1976. In the metro areas contained in this report, the lowest jobless rate was in Billings at 2.4%, followed by Great Falls at 2.5%, and Missoula at 2.7%. Revisions by the labor department showed an economy that is doing better than originally thought. The only cause for concern is that the labor force has not been increasing at a pace that can keep up with the needs of employers, as demonstrated by the very low jobless rate. This will likely lead wages to rise significantly to attract more workers.

❱ The lower number of sales can be blamed on the lack of homes for sale: inventory was down 37.7% from a year ago and was 31.7% lower than the previous quarter.

❱ The small county of Jefferson saw sales increase from a year ago, but all other markets pulled back. Compared to the final quarter of 2021, sales were lower across the board. 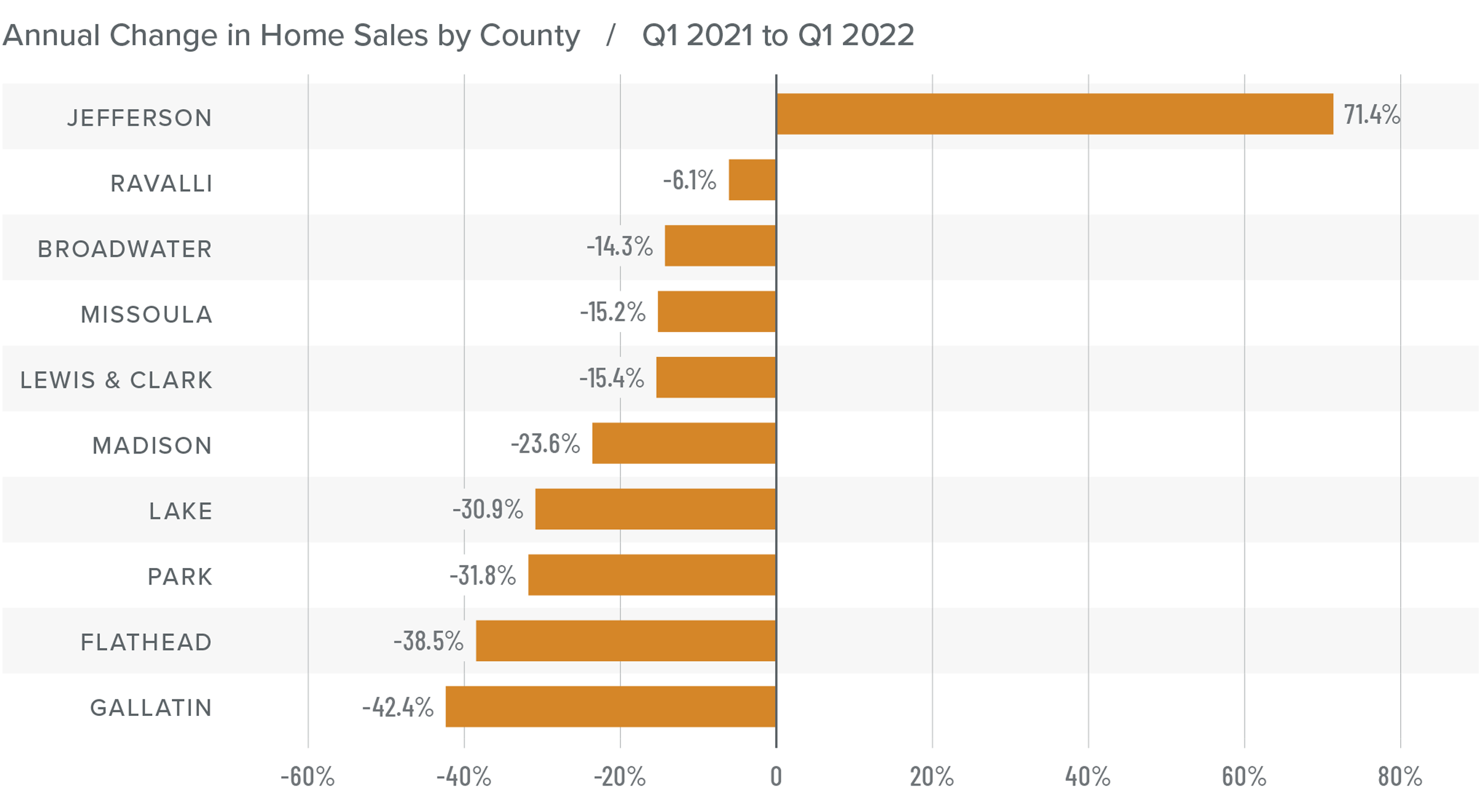 ❱ Compared to the fourth quarter of 2021, prices were split: there were increases in Ravalli, Lewis and Clark, Lake, Jefferson, and Gallatin counties, but prices fell in the remaining market areas.

❱ Although the tepid increase in prices may surprise some readers, it uses weighted averages which account for market size. If we use simple averages, prices in the region rose by a more significant 14.5% year over year.

❱ There is a lag between mortgage rates rising and any impact on home prices. Thus far, higher financing costs have not had much of an effect on the market, but data from the second quarter of this year should give us a better idea as to whether the increase in rates is enough to dampen the market significantly. 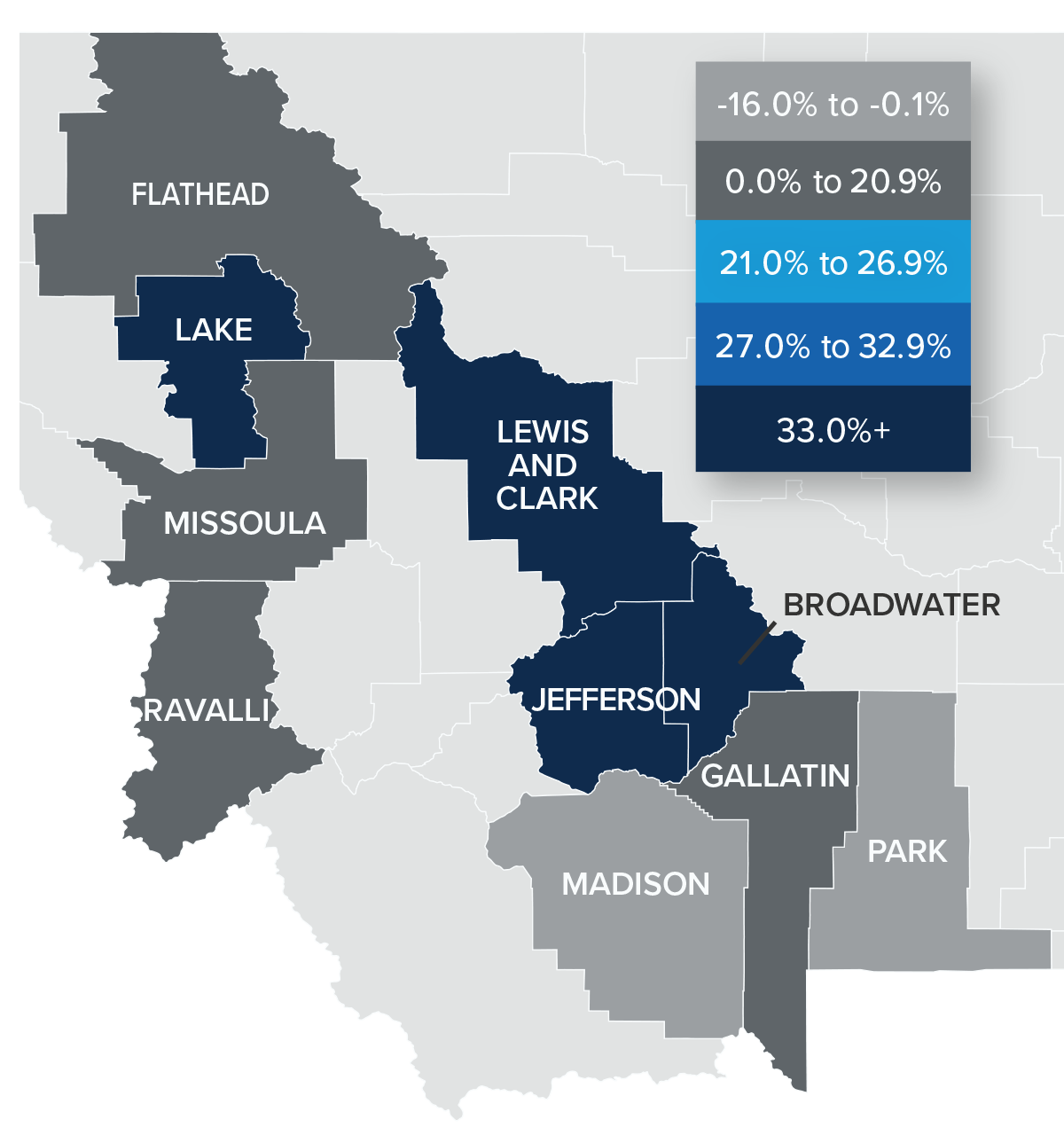 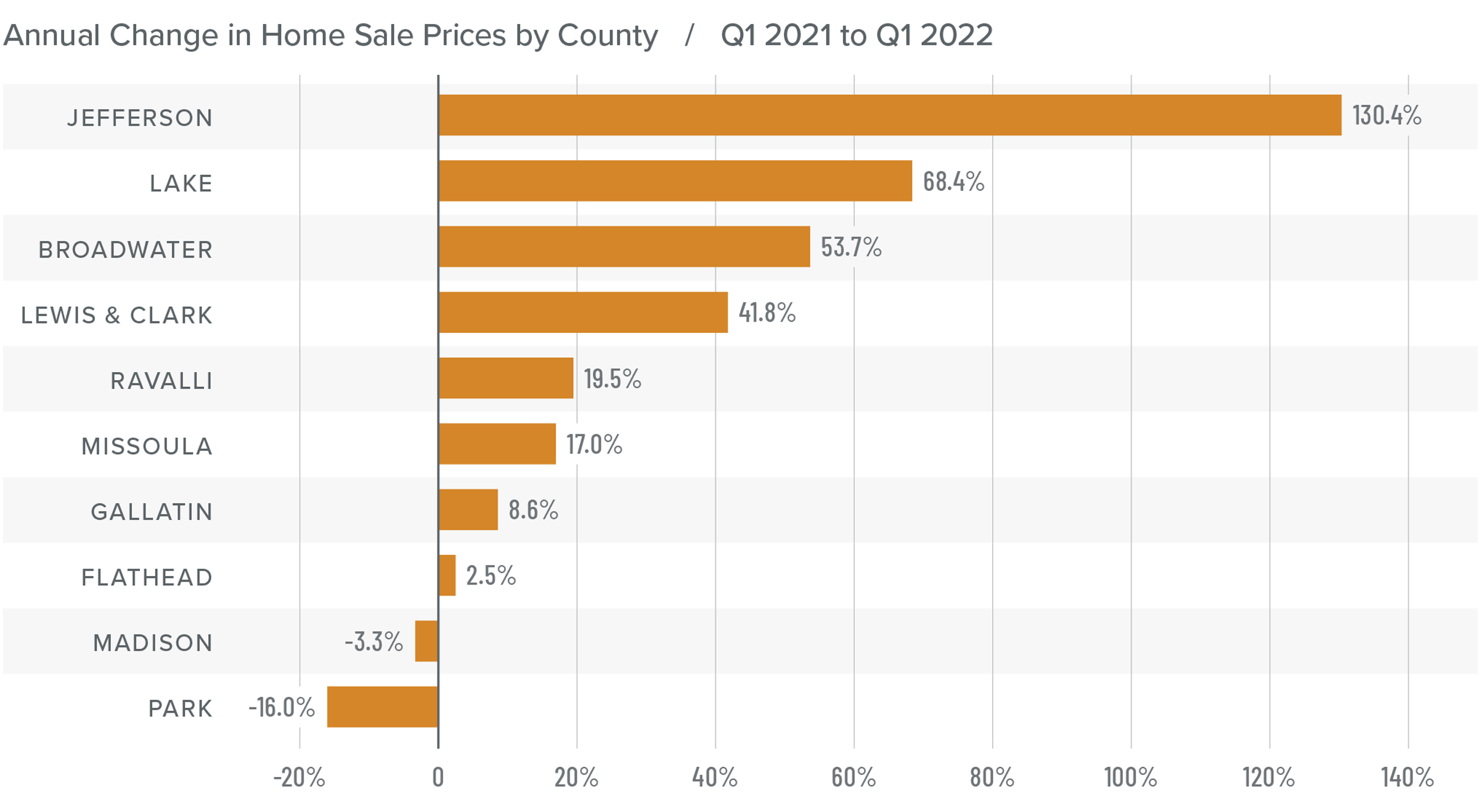 Average rates for a 30-year conforming mortgage were 3.11% at the end of 2021, but since then have jumped over 1.5%—the largest increase since 1987. The surge in rates is because the market is anticipating a seven- to eight-point increase from the Federal Reserve later this year.

Because the mortgage market has priced this into the rates they are offering today, my forecast suggests that we are getting close to a ceiling in rates, and it is my belief that they will rise modestly in the second quarter before stabilizing for the balance of the year. 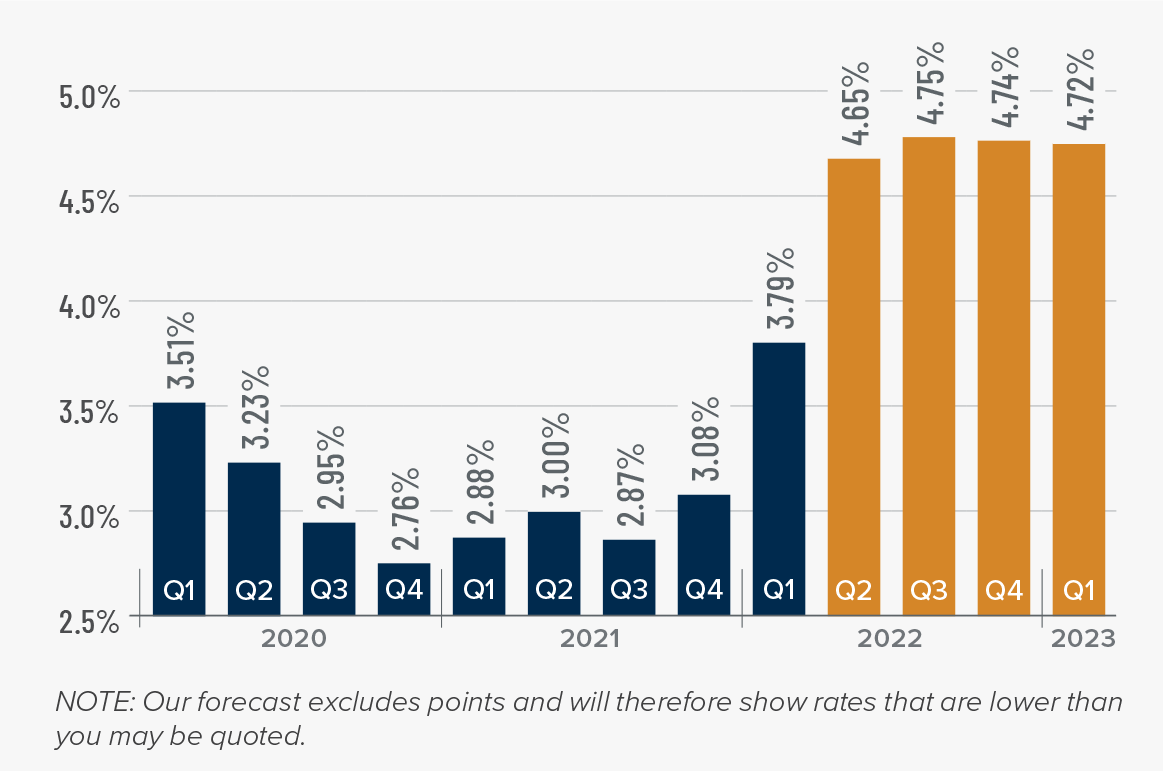 ❱ The average time it took to sell a home dropped 15 days compared to the first quarter of 2021.

❱ Homes sold fastest in Gallatin County and slowest in Madison County. Missoula, Ravalli, Lake, Lewis and Clark, Broadwater, and Gallatin counties saw market time drop. The length of time it took for homes to sell rose in the rest of the counties contained in this report.

❱ During the first quarter, it took an average of 68 days to sell a home in the region.

❱ Average market time across the region rose one day compared to the fourth quarter of 2021, but was lower in Missoula, Lake, Broadwater, and Jefferson counties. 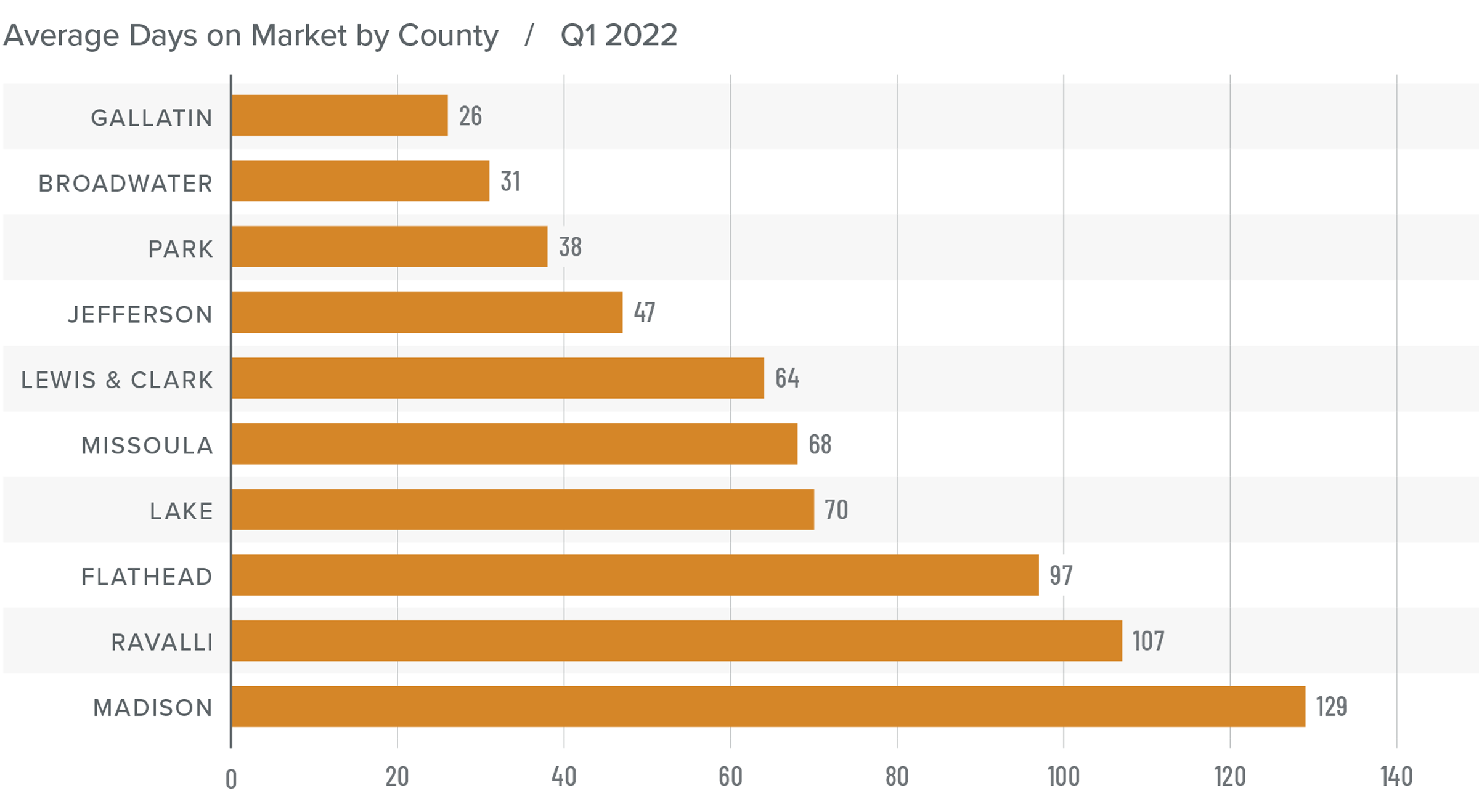 Full employment and a growing economy tend to encourage home buyers, but rising financing costs are a cause for concern. Furthermore, we have yet to see whether the increase in mortgage rates will have a dampening effect on price growth, especially if more homes come on the market. 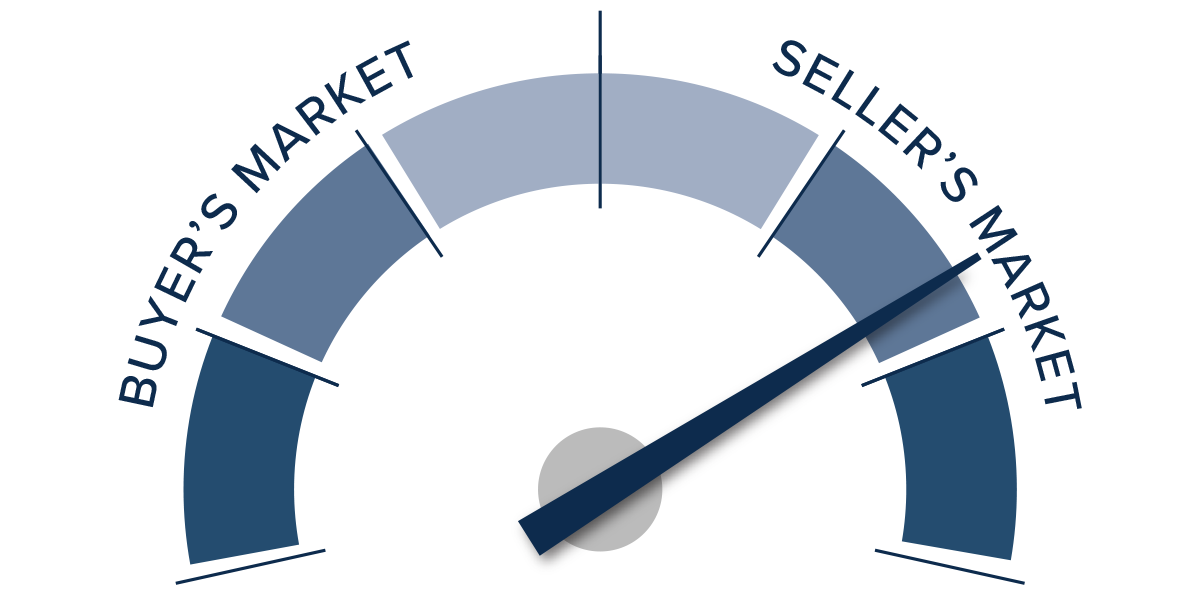 With this level of uncertainty, I have left the needle in the same position as the previous quarter. The data shows that an inflection point may have been reached, as indicated by slowing home-price growth and lower sales, but the impact of mortgage rates is not clear at this time. We should have a better picture of the market as we move through the spring. That said, it firmly remains a seller’s market.

As Chief Economist for Windermere Real Estate, Matthew Gardner is responsible for analyzing and interpreting economic data and its impact on the real estate market on both a local and national level. Matthew has over 30 years of professional experience both in the U.S. and U.K.